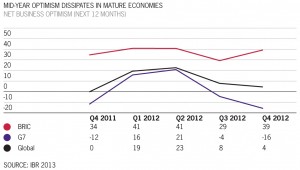 The big New Year business story was that politicians in the United States had pulled the economy back from the brink of the ‘fiscal cliff’, albeit slightly later than planned. Stock markets rose and many business leaders breathed a collective sigh of relief.

But closer inspection of the deal reveals that only the question of tax rises was addressed. Potentially thornier negotiations around spending cuts and the debt ceiling remain unresolved. It is now not just European leaders who are being accused of ‘kicking the can down the road’.

The impact of this uncertainty on business growth is stark. Our most recent IBR survey revealed that, having risen to 50% in Q2-2012, net business optimism in the United States fell to -4% in Q4-2012 – the lowest since the depths of the financial crisis. Expectations for increasing revenues (down 10 percentage points) and profits (down 9) fell sharply from Q3-2012.

Furthermore, almost half (46%) of US businesses cited the uncertainty surrounding the resolution of the ‘fiscal cliff’ as an obstacle to developing and implementing their firms’ business strategies. Should agreement not have been reached, they were likely to delay investment decisions and expansion, and lay off workers, all of which would further dampen economic growth.

But will the ‘fiscal cliff’ deal, such as it was, be enough to encourage businesses to stop bolstering their cash reserves? With other key decisions looming, are businesses really going to choose now to invest?

The uncertainty in the world’s largest economy resonates across the globe. At a time where the eurozone remains in crisis and growth is flat, Japan has a new government and is back in recession, and the BRIC economies are slowing, it is especially bad news for the global economy.

The outlook for at least the first half of 2013 remains difficult, and business leaders are cautious about growth prospects. Timely agreement in the United States would be a major boost to business confidence. It might even encourage leaders in the eurozone to follow suit.